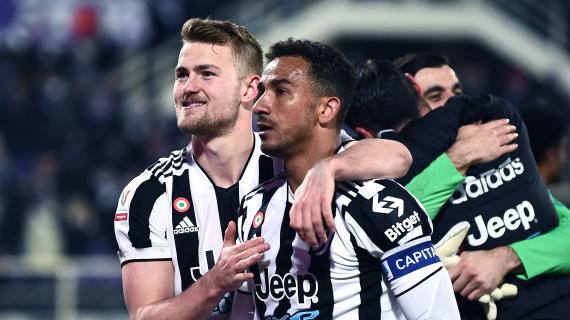 Juventus earned a hard-fought 1-0 victory over Fiorentina last night, to give them the advantage going into the second leg of the Coppa Italia semi-final.

La Viola will be frustrated not to have taken advantage of playing the first leg at home, and will feel even worse after their immense effort throughout the 90 minutes last night only to succumb to a late own goal, with Juan Cuadrado’s cross deflecting off the defender and into the net.

Regardless of the fashion in which the goal was met, it was a resilient performance from a much-changed starting XI, and they had to maintain high levels of focus to deny a strong push from Fiorentina to deny them at the other end also.

Danilo insists that his side are here to win the competition, before claiming that he was happy for his side who fought hard to get the right result last night.

“The Italian Cup is our objective,” Danilo said after full-time (as translated by Juve’s official website). We must play every game in the same way, the competition makes no difference. Today we showed that we have a strong squad and that we are on the right path. I am very happy for the boys because they worked so hard and sacrificed themselves. The absences were felt, but we showed that we are all prepared and ready to play. Now there is the second match to be played in front of our fans, but I am happy with this victory.”

You must give credit to both the players and manager Max Allegri after seeing our heavily-depleted squad fight for a tough win in Fiorentina. The job is certainly not done however, especially if Fiorentina turn up with the same force that they played with last night.

It certainly wasn’t the performance we wanted to see, but we had to play to our strengths with a number of absentees, and the back five including just one centre-back seemed to do it’s job.