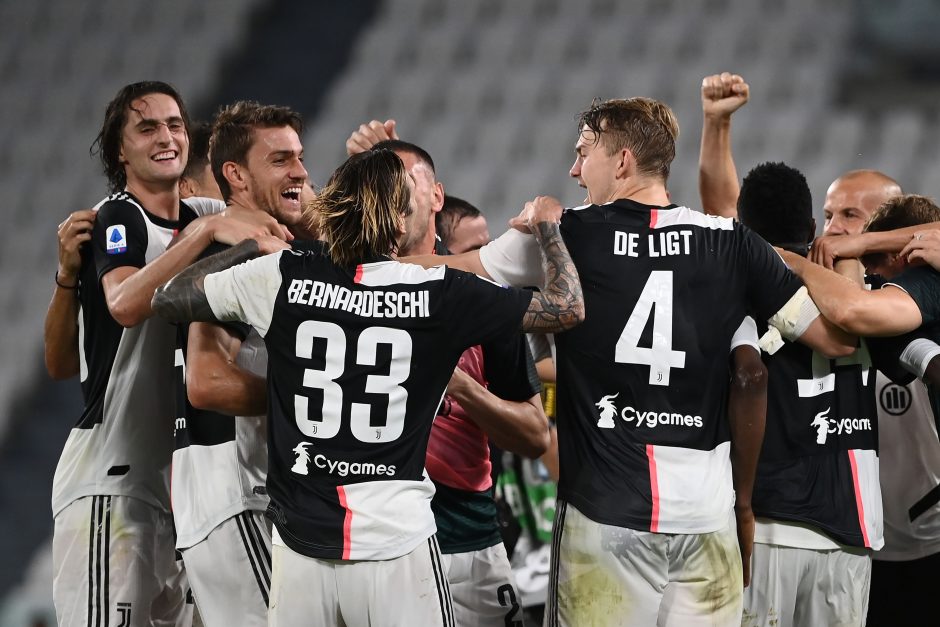 Maurizio Sarri won his first league title with Juventus, but joked with his players ‘If you won with me, you must be good.’

The season has been full of ups and downs but it was a special moment for Sarri, who became the oldest coach to win Serie A at age 61.

“It has a special feeling, of course. It’s difficult to win, it becomes even more complicated to keep winning, as taking something for granted in sport is one of the biggest lies in the world,” he told Sky Sport Italia.

“It was not a walk in the park. It was long, difficult, stressful, and this squad deserves a lot of credit for continuing to find the hunger and determination to keep going after eight wins in a row.

“I left the field because I was trying to avoid getting a bucket of water thrown over me, as it was obviously on its way, but I didn’t manage to get away.

“Dybala? We’ll have to do some tests, but there does seem to be a muscular problem.

“Cristiano Ronaldo and Dybala make the difference on the field, so clearly they deserve a lot of credit, but the club behind them is every bit as important. We have a President and directors who attend training every day, are there to exchange ideas, see if you need anything and put petrol in the tank of this team. The club is a big part of why they were able to win for so many years. They back you even when you lose.

“In terms of organization, Juventus are at the top of European football. I could not have asked for anything more. Obviously, it takes a while to settle in, understand the approach, the way things work here, then after a while you can start trying to tweak a few things.

“You can’t just walk straight into a club that has won for eight years in a row and immediately try to order changes. That wouldn’t be very intelligent.

“There were tactical difficulties, trying to get all these very strong players and their various characteristics to work together. That was not something to be taken for granted, as we saw in previous years, because Dybala and Ronaldo didn’t really start together very often.

“They are world class, but it’s not easy to get them to work together with their characteristics. With a lot of work, I think we managed it.

“Before the lockdown, we seemed to find a certain solidity, that we then lost again after the restart. I saw in many teams during this period that they got stretched out or lost focus at times, so maybe it was a general issue we all had after such a long break.

“I think that happens more or less in any dressing room, doesn’t it? We all try to seek improvements and find ways that everyone can be happy, as this is a collaboration. The more openly we face issues, the easier we can resolve them.

“I told them, if you won with me who has never won anything, you must be really good!

“The first day you come in, you see people, not just world class players. As time passes, you get fond of them and the rapport goes from being strictly professional to personal too.

“The first day, I step into the locker room and know there are some top players. After a while, you walk in there knowing there are some great guys you can rely on too.”

Updates on Dybala and Danilo