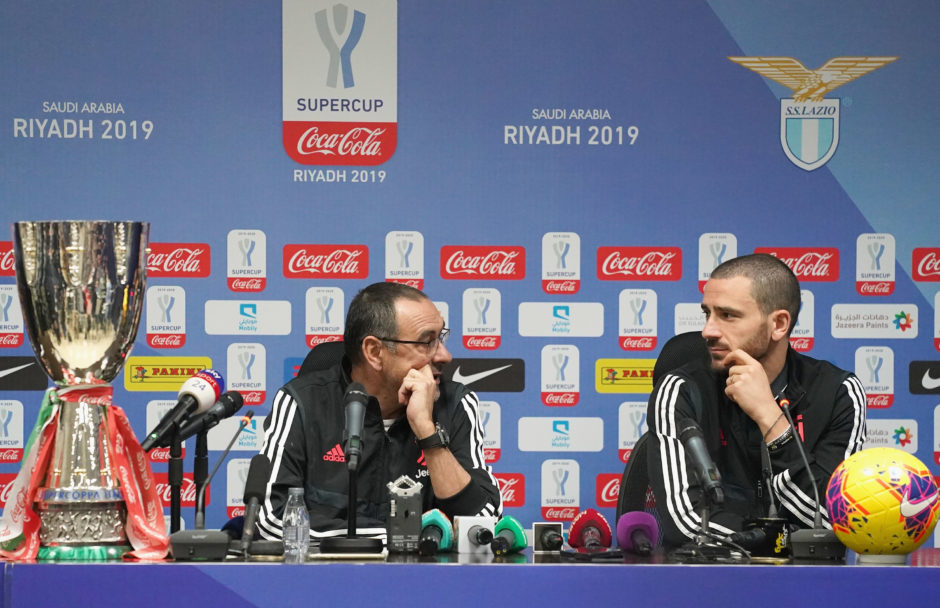 Sarri: ‘The team are starting to play my way’

Maurizio Sarri says he is “starting to genuinely enjoy himself” at Juventus as the team are starting to play the football he proposed.

The Bianconeri have been on a good run of form since losing 3-1 to Lazio, a game that seemed a turning point for Sarri and his squad.

“I am starting to genuinely enjoy myself in our training sessions,” Sarri said in his press conference ahead of the Supercoppa final against Lazio.

“If I do that, it’s because the team is playing or at least trying to play the football that I proposed. If I am enjoying myself, it suggests we have some weaknesses, but I can fix them. The objective must always be utopia, as if we’re never completely happy, we will always have something to improve.

“Don’t forget, we’ve only lost one game. Over the last two matches, we’ve changed system and it does take a lot out of you, so inevitably we got stretched out towards the end.

“We conceded two goals over the last three games, one of them was at the 95th minute. It’s not like we are leaking goals every five minutes.

“We are making mistakes, but strangely tend to concede more when we are defending deep than with a high press. It’s difficult to work out why that is, so we need to work on it.

“Wojciech Szczesny is available, Mattia De Sciglio is in good shape, Aaron Ramsey and Douglas Costa are working their way back to full fitness. We’re only missing Giorgio Chiellini and Sami Khedira, who both had knee surgery.

“I played three Finals last year with Chelsea. It’s an important game, we are motivated and there are elements within our last meeting that can give us even more motivation.

“Lazio are even more dangerous in a one-off match, as they are strong physically and tactically. I find it incredible they haven’t been able to qualify for the Champions League over the years, as they have one of the best midfields in Serie A and Ciro Immobile who scored 16 goals in 17 games.

Former Juventus coach Max Allegri said this week that tactical systems are irrelevant compared to the talent of individual players.

“I just hope the Presidents don’t realise that, otherwise our salaries will be halved! I do agree that a coach doesn’t need to transform players, but he does need to impact on a team while respecting the characteristics of the players.

“These are personal opinions, we all have different ways of working.”

Ramsey: ‘My first chance to win with Juventus’