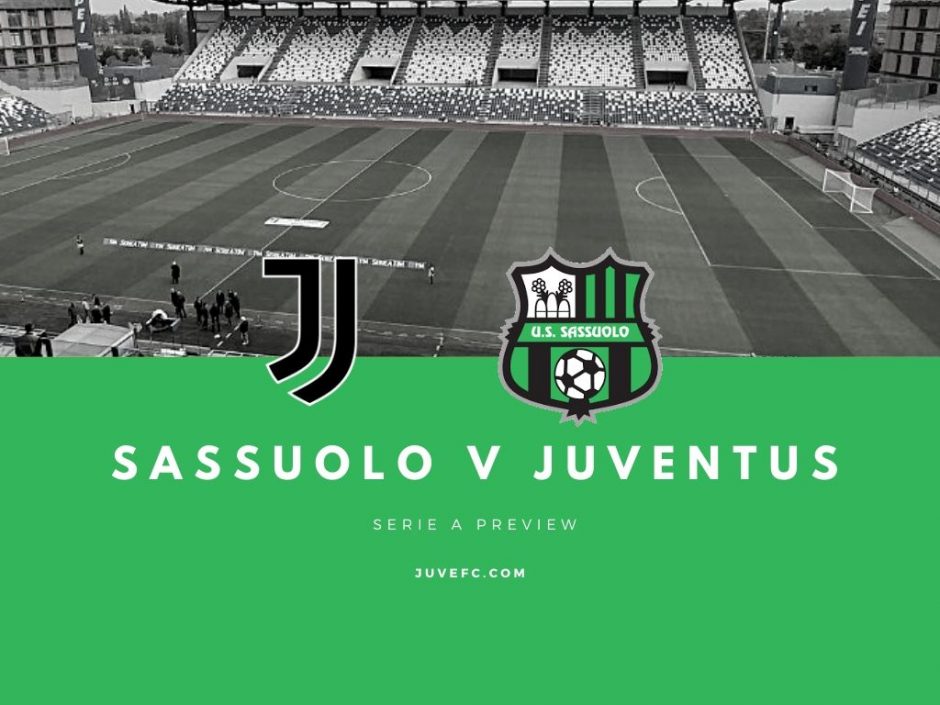 In the grand scheme of things, getting out of a hellish week with an eight-point cushion is close to a best-case scenario and the title is mathematically 11 points away and it will likely take a little less than that. Zooming in instead, the standings could have been more definitive, the regrets about what happened at the San Siro still linger and the result versus Atalanta was mostly lucky.

The Old Lady was fortunate to come out of the first half with just a one-goal disadvantage given that the Bergamaschi thoroughly dominated and simply proved to be hungrier and in better shape. Having the luxury of settling for a tie since Lazio had stumbled again earlier on Saturday was not a good enough excuse for such a lackadaisical approach. And it being a strategic move to save energies for the later stages almost defies logic. Having averted disaster, the Bianconeri came out much better in the second half. The first equalizer was obviously fluky, I guess what goes around comes around in terms of questionable hand-balls, but probably would have come anyway since we were starting to have more possession and create some okay chances.

The second Atalanta goal was out of the blue, generated by a giveaway in a dangerous spot and crafted by the stunning quality of their attackers and not the product of their well-orchestrated offence like the first one and it came in a moment when Juventus had a tiny upper-hand. To their credit, the players were not shell-shocked by it, something that happened so many times in the past, and mustered up a reaction, then an episode went their way, but homo faber fortunae suae. Whoever thinks we should just dominate whenever we are at home probably has not been paying attention to Atalanta lately.

In what was an instant-classic and the most intense match of the season, we saw how pivotal the absences of Matthijs De Ligt and Paulo Dybala were against Milan, and we got some answers on their stature. The Dutch starlet did not have a perfect game, but Duvan Zapata would have easily had his way if it was not for him, and they probably would have scored two or three times simply on plays where he was involved. La Joya tried to carry the team in the first half when the oxygen level was low and some of the best offence came when he managed to get the ball, shield it from defenders and turn around. He took up his responsibility and it is a positive sign for the future of the club.

The midfield sans Miralem Pjanic was fine for its increased muscularity and Adrien Rabiot is growing a lot, but for the most part it was playing catch-up with the opposition. I am not sold on Rodrigo Bentancur being somebody that can actually pull the strings, and he was poor on the two goals. The decision-makers would put a cap on his growth and impact if they envision him permanently in that position, and perhaps even hurt the team a little. Then the clash showed that some players are geared up for battle and some truly are not.

After a gruelling game and a lot of continuity in the lineup, it might be time for some rotation. Juan Cuadrado is suspended, so Danilo, who needs to wake up, will move to the right and Alex Sandro came off the bench pretty well versus the Orobici. Leonardo Bonucci was almost subbed off due to a heel problem and is a likely candidate to be rested, while Miralem Pjanic is not 100% and did not see the pitch on Saturday. Everybody up front has been carrying a big load, but some are really irreplaceable right now given the lack of form of the substitutes. 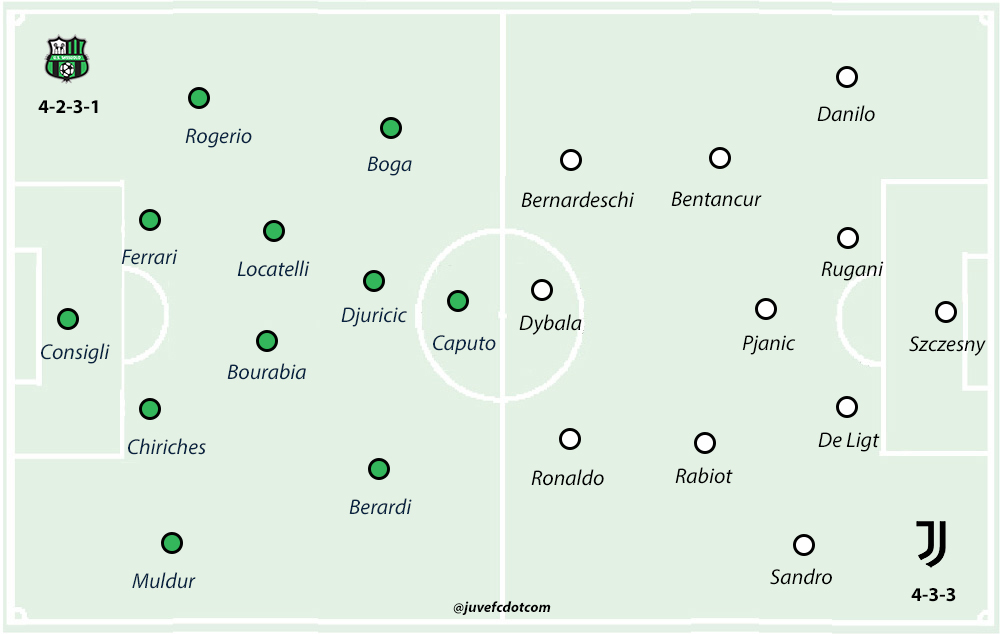 Sassuolo have won four matches in a row, against Fiorentina, Lecce, Bologna and Lazio, and have been one of the most prolific teams after the resumption, bagging 16 goals in June and July. With this late surge, they are close to the heights they had reached with Eusebio Di Francesco at the helm and are in contention for a Europa League berth, although they probably will not get it. They have remained pretty cutting edge thanks to the exciting ideas of the fast-rising Roberto De Zerbi, whom they have recently managed to lock down for next season.

Besides installing a high-powered offence, the coach made a key change a couple of months into the season, tweaking the midfield and moving from a 4-3-3 to a 4-2-3-1. A modification that may appear minute, but benefited several players, as Pedro Obiang and Francesco Magnanelli are more at ease at pivot rather than as deep-lying playmakers and Filip Djuricic and Hamed Traore are way better as attacking midfielders  han box-to-box.

The biggest winner was Manuel Locatelli, who is a bit slow and and therefore perfectly comfortable as pivot, where he has to do a little bit of everything but does not need to excel in any particular area. The two quality wingers, Domenico Berardi and Jeremie Boga, who are the engine of the team, accepted having to defend a little more, and everything clicked, allowing them to shake off a poor start and to climb the standings. Berardi has been putting up career numbers and finally seems to have taken that final mental step that could allow him to move to a top team.

Year-to-year continuity has clearly been a problem and what has prevented them from making the leap as a club, but that comes with the territory. A well-run, fairly wealthy side is prone to unearthing interesting prospects that inevitably end up being poached by bigger teams (Merih Demiral, Stefano Sensi and Pol Lirola were the latest examples) and that forces them to reload every season, which tends to exclude them from more prestigious objectives since the squad needs some time to gel and is prone to coming out of the gate slowly.

While not particularly satisfying from a sporting standpoint, it is a very healthy business model, and they are quite shrewd in the transfer market. They have vowed to keep the core intact this time around, even though especially Boga and Locatelli are very coveted. The Ivorian attacker has had an outstanding growth, removed some selfishness from his style, which is only natural since he is one of the best pure dribblers in the League, and turned into a terrific shooter and a bona fide difference maker.

Francesco Caputo is simply the right type of striker for this type of team, since he can keep up on counters and play-make for others on top of having a strong nose for the goal. Georgios Kyriakopoulos came out of nowhere and held down the left-back position very well once Rogerio got hurt and, on the right one, Jeremy Toljan and Mert Muldur have both been factors in the two different parts of the campaign. They established excellent chemistry with Domenico Berardi, and they are big presences in the final third.

The first order of business for Juventus will be to try to stop Berardi and Boga, who are both strong cutters and shooters. Caputo and their no.10 du jour take advantage of the extra attention drawn by them, while the fullbacks sprint to the baseline to provide width. They attack quickly and in bunches, which can make them quite unbalanced and the solidity of the back-line is their Achilles heel, as they are far less talented and pretty sloppy there, whatever combination of centre-backs they deploy.

De Zerbi has been rotating his line up like a madman: Berardi did not feature versus Lazio, Caputo did not start so now it could be up to Boga and Djuricic to receive the same treatment, with Lukas Haraslin, Traore or the recently discovered Giacomo Raspadori as the possible replacements.