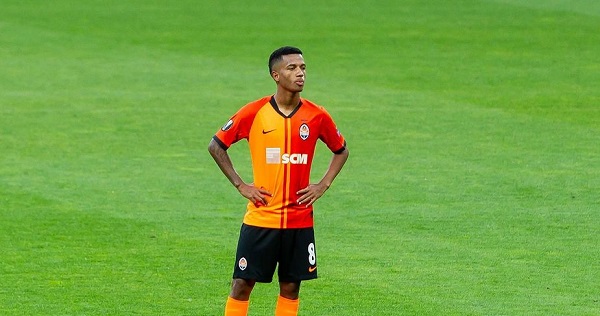 Due to the ongoing war, footballers who play in the Russian and Ukrainian leagues are free to sign for any other club thanks to a special permit from FIFA.

The leagues in the warring countries have been naturally postponed. Therefore, the players are now free from any obligations towards their current clubs.

Thus, this could prove to be a great opportunity for the rest of the European sides to reinforce their squads in the middle of the campaign.

For their part, Juventus could use a new player amidst the ravaging injury crisis, especially in the middle of the park.

While Max Allegri relies on three midfielders in his starting lineup, he only has three available at his disposal. Weston McKennie’s season is over, and Denis Zakaria won’t be back before another couple of weeks.

So according to il Giornale via TuttoJuve, the Bianconeri are considering signing Shakhtar Donetsk midfielder Marcos Antonio.

The 21-year-old is an up-and-coming Brazilian who can operate in a central role as well as an attacking midfielder.

The report explains that Juventus can legally pull off the operation as they do have an available non-EU spot.

If the management truly believes in the player’s talent, then this would be a perfect opportunity to strike a deal.

However, if we’re only looking for a stopgap solution until the end of the season, then we’d be better off trusting the few options at Allegri’s disposal.

After all, the young Brazilian would require an adjustment period, which could eventually last until the end of the campaign.

Moreover, Juventus already possess a host of young midfielders who will contest for a spot in next season’s squad.