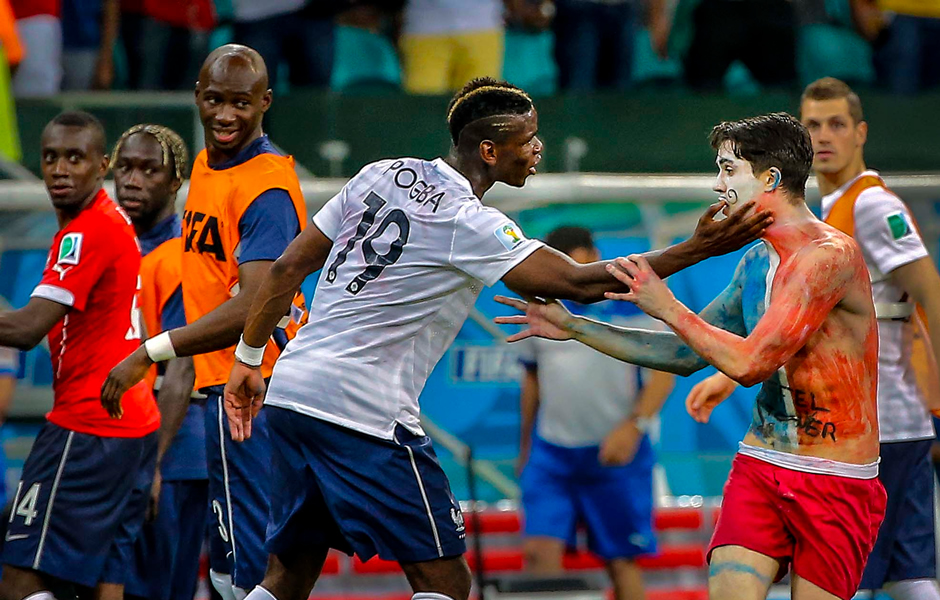 The bordering nations of France and Switzerland met on Friday afternoon at the Arena Fonte Nova in what turned out to be a massacre of the Swiss. The much maligned FIFA World rankings has Ottmar Hitzfeld’s men in 6th position and the French in 17th place, by the end of the 90 minutes here you’d wonder how Switzerland ever made it into the top twenty.

Didier Deschamps dropped Paul Pogba for the game, many suspected due in part to his anger over Pogba picking up a yellow card in the previous game.  Juve’s ever-dependable right back Stephan Lichtsteiner started for the Swiss in his usual position.

There was a heavy Serie A presence in the game with Napoli midfielders Gokhan Inler and Valon Behrami starting and their club teammate Blerim Dzemaili on the bench alongside Juve’s exiled left back Reto Ziegler.

France started with menace from the opening whistle, with Karim Benzema going close with a curling effort in the opening minutes. Switzerland’s problems started when their defender Steve Von Bergen got busted open and was replaced by ex Milan defender Phillipe Senderos.

Minutes later France scored the opening goal, Olivier Giroud rising to score a header from a corner, with Swiss goalkeeper Diego Benaglio managing only to get a hand to the ball.

Les Bleus scored their second immediately after the first, Valon Behrami playing a suicidal pass in midfield that was seized by Benzema who galloped forward before slipping the ball in for PSG midfielder Blaise Matuidi who fired past Benaglio.

The Swiss defence were being pulled apart seemingly at will, however they thought they had pulled a goal back when Granit Xhaka put the ball in the back of the French net only for the referee to correctly disallow the goal for offside.

France had the opportunity to make it 3 – 0 when they were rewarded a penalty in the 30th minute, Benzema going down under slight contact from Johan Djourou. Benzema unexpectedly missed his penalty and Yohan Cabaye smashed the rebound against the crossbar.

You sensed that any minute France would get the third goal, such was the relentlessness of their attack, and sure enough the third goal came, Matthieu Valbuena finished off a lightening-quick counter attack after being teed up by Giroud.

Paul Pogba made his appearance in the game in the 62nd minute, replacing Giroud and several minutes later made a stunning impact. Juve’s no.6 curled a delicious through ball with the outside of his right foot into the path of the Swiss terroriser Benzema, who made no mistake and fired it past the hapless Benaglio.

Benzema was by far and away the best player on the pitch, when he ran at the Swiss backline there was pandemonium and five minutes later he set up Moussa Sissoko, who hit an angled drive into Benaglio’s bottom right hand corner to make it 5 – 0.

Switzerland made it 5-1 with Napoli’s Dzemaili, who came on as a second half substitute. He scored a free kick, which narrowly squeezed past a gap in the wall and into the French goal.

France’s quiet neighbor then added a second consolation goal, and what a beauty it was, Gokhan Inler played a lovely ball over the top which Granit Khaka ran onto and hit a left footed volley past Hugo Lloris.

There was controversy at the end as Benzema thought he had scored another to complete his hat trick with a stupendous curling effort into the top corner, but the referee had blown for full time before the ball had reached the net.

In regards to how Juve’s players performed, Lichtsteiner as always gave an industrious performance but could do nothing to stop the tidal wave of French attacks, he was let down by his fellow defenders who were hapless as Benzema and Giroud cut them to shreds.

Pogba put in a decent performace in the half hour he got on the pitch, as mentioned earlier, his assist for Benzema was spectacular, aside from that, he kept the ball moving along nicely and didn’t lose possession. One would expect Deschamps to start him in the final game against Equador.