Greetings and best wishes to all in these uncertain times. Perhaps you, like me, feel it’s been half a lifetime since we were able to consume any type of live sporting event. I’ve missed it dearly.

Alas, we’ve plenty of time to kill, so why not put pen to paper? For today’s subject: Adrien Rabiot.

To preface: unless an unreasonably high offer, or a fantastic player plus cash deal were to present itself for him, I would not move on the young Frenchman. So, if you are to be enraged by any view that includes keeping him, I assure you it will only get worse for you from here.

Let’s begin, shall we? The pony tailed youngster is a tall, left-footed player, who combines his physical qualities with good technique. A composed passer with good link up play, who has fairly good feet in close space, is more than capable of shielding the ball, and is decent in the tackle. 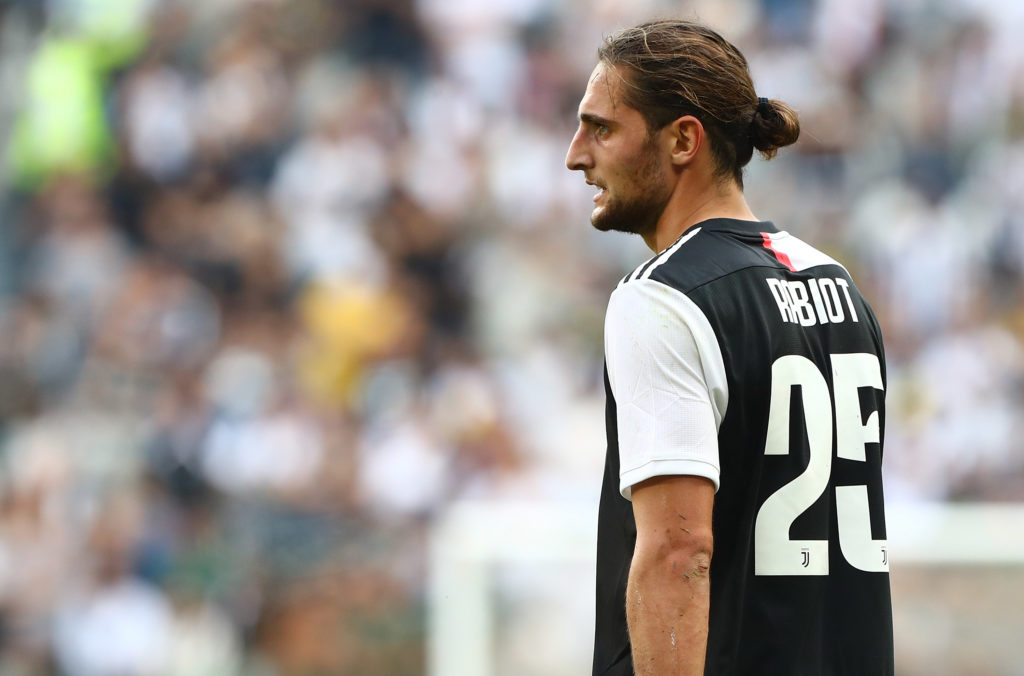 TURIN, ITALY – SEPTEMBER 28: Adrien Rabiot of Juventus looks on during the Serie A match between Juventus and SPAL at Allianz Stadium on September 29, 2019 in Turin, Italy. (Photo by Marco Luzzani/Getty Images)

The 25-year-old Saint-Maurice native has a very interesting story, having had a number of controversies for a man of his young age. The fact that his own mother is not only his agent, but also seems quite the character herself, is one of the more laughable portions. A number of contract stand-offs, agreeing a move to Roma, and being linked with Barcelona…yet, here we are with him at Juve.

In 2007, at 12, his father had a stroke, rendering him paralysed except for his eyelids. In 2008, he shipped out for Manchester City’s youth side. In 2010, at 15, he joined PSG. In 2012 he went on loan to Toulouse for the first half of the season before returning to PSG. He featured 13 times for Toulouse.

By the end of the 2013/14 season, he had gradually eased himself into the starting eleven despite facing competition from Thiago Motta, Blaise Matuidi, and Marco Veratti. In February 2017, during PSG’s 4-0 first leg win over Barcelona in the Champions League Last 16, he received a 9/10 performance from L’Equipe. A rarity to receive such a high rating from them. He even managed to tackle and nutmeg Messi in one movement.

Quite the decade, no? By the age of 23, Rabiot had earned nearly 250 senior club appearances, had 13 trophies, but couldn’t buy himself a minute on the pitch. Was it because he refused a standby slot on the World Cup list after being disappointed at being left out of Deschamps’ squad? Was it his refusal to sign a new contract at PSG and contract negotiations subsequently breaking down? Is he overly ambitious, or truly a bad seed? I’d like to think it’s the former.

He looks a player who thrives on consistency, and with only 8 of his 24 appearances for us lasting a full 90 minutes, it seems that consistency is hard to come by. That’s before we even mention his current need to adapt to a new country, language, playing style, squad, coach, and Juve’s general reticence to give regular chances to young, or even new players immediately. That’s a lot of moving parts.

Considering his last competitive minutes with PSG were December 11th, 2018, and his debut with Juve was August 24th, 2019, I am willing to forgive a little rust needing to be shaken off in regard to match sharpness. Still, he maintains a 91% pass accuracy, 1.7 tackles/game, 1.3 dribbles/game, and an average match rating of roughly 7/10 per game.

Certainly no slouch numbers from a central midfielder. He’s certainly had a few mistakes, and many have made a big deal of that, but don’t forget, Matthijs De Ligt, who’s been in the squad for nearly an identical amount of time and has had 5 or 6 handballs before finding his feet. This is not to call De Ligt a poor player, or criticize him. Far from it. I quite like the young Dutchman. Just a point of reference.

With his experience, Rabiot, with his age, talent, and numbers, has a high upside for success. It’s my belief that he may yet have a significant impact on the side, and that moving him on would be a mistake. It isn’t as if he commanded an extreme fee to live up to, despite the hefty salary. He came on a ‘free’. He is far less injury prone, much younger, and much more capable than a few of the current inhabitants of the engine room. For a bit of perspective, consider that Bernardeschi has been with us three years, and most are just now having had their fill, finally ready to move on from him. Rabiot has just half a season with us, and I think a fair chance should be given to the lad. There’s more pressing matters in the squad as a whole, as well as in the centre of the park. Hopefully we will see him live up to his potential and impress, but, it’s too early to write him off just yet.