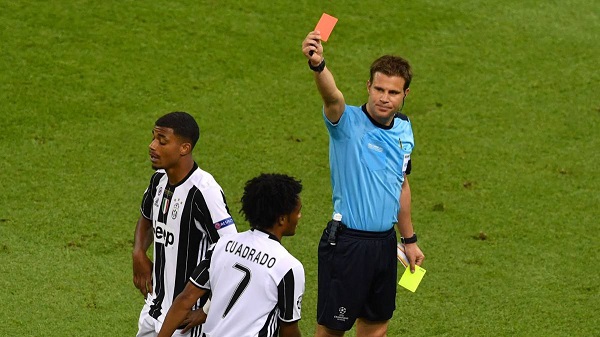 It’s Juve’s big night, as Andrea Pirlo’s men host Porto in the second leg of the Champions League round of 16.

The Bianconeri will either overturn their 2-1 loss from the first leg, or they will be facing an early European elimination for the second season in a row.

Mehdi Taremi scored after a minute of play, and his teammate Moussa Marega doubled the scoring immediately after half time.

Luckily for the Old Lady, Federico Chiesa found the back of the net with a late strike to reignite the Italian hopes.

Although Juventus are focusing exclusively on Tuesday’s big encounter, some news reports are already locking beyond it.

According to Calciomercato, two players risk missing out on the potential first leg of the quarter finals due to a yellow card suspension.

Juan Cuadrado and Rodrigo Bentancur are the Bianconeri stars who are one booking away from receiving a one-match suspension.

Effectively, this means that the Colombian is the only one who’s at risk tonight, as his Uruguayan teammate is already out of the squad after testing positive for Covid-19 last week.

The former Boca Juniors man was the culprit behind Porto’s opening goal in the first leg, as he completely botched his back-pass towards Wojciech Szczesny, which allowed the opposition striker to pounce on the golden opportunity.

Whilst it wouldn’t be a bad idea for Cuadrado to be a little bit careful with his challenges on Tuesday, the main objective remains qualifying to the next stage of the competition.

If the former Fiorentina were to receive a yellow card, he would still be suspended for next season’s first European fixture in case Juventus get eliminated.

Opinion – Juventus and Pirlo facing their most important test