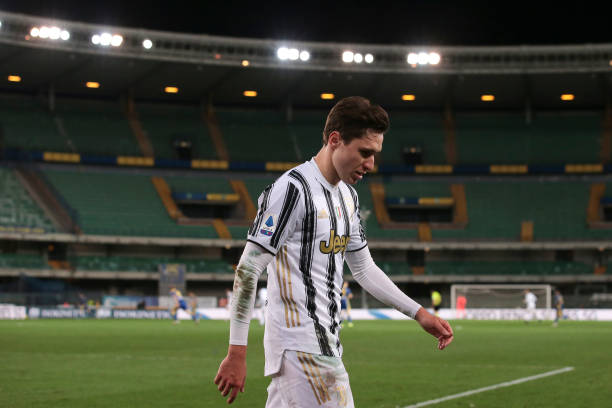 On Wednesday evening, Juventus fans had to thank Federico Chiesa in particular for the club’s first win of the Serie A season.

The Old Lady needed a hero to spare her the blushes as another embarrassing defeat was looming when the hosts took a shocking 2-1 lead.

Nonetheless, the Euro 2020 winner chased Daniele Verde to the byline, won the ball back and stormed his way towards the box, which culminated in a vital equalizer at the Bianconeri’s most desperate hour.

Matthijs de Ligt delivered the winner minutes later, but Chiesa asked to leave the pitch, as he felt his flexor hardening yet again after putting immense effort throughout the match.

The former Fiorentina man already missed few matches due to the same problem earlier this month. But luckily for Juventus, the player has once again escaped injury.

According to ILBianconero, Chiesa hasn’t sustained an injury, but Max Allegri could give him some rest ahead of the club’s big Champions League clash next week.

Therefore, the winger might be dropped for Juve’s encounter against Sampdoria on Sunday, as he tries to regain his full fitness for the battle against Chelsea next Wednesday.

The Bianconeri’s domestic campaign remains in great jeopardy, and a negative result this weekend could surely refuel the tension. However, the team may have to earn a victory in the absence of one of its most important stars.