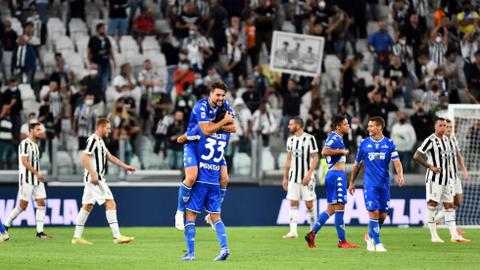 The miserable numbers behind Juve’s winless Serie A run

Four matches into the campaign, and Juventus continue to drop further in the Serie A table. The Bianconeri almost earned their first win of the season against Milan, but they couldn’t hold on to their lead, as Ante Rebic snatched the equalizer.

We all know that situation is pretty bad, but a report from ILBianconeri revealed its extent by exposing the numbers behind the club’s winless run.

The Old Lady has only garnered two points from the first four rounds, and are currently in the 18th spot. Max Allegri’s men have only scored four league goals thus far, with all of them coming in the first half.

That’s right, Juventus are yet to score a single Serie A goal in the second half so far this season! Even their three Champions League goals against Malmo came in the first half.

On the other hand, it’s astonishing to believe that the Biacnoneri are yet to earn their maiden win of the season, despite the fact that they took the lead in 3 out of their 4 Serie A matches. Meaning that they squandered the lead on three separate occasions.

Allegri’s men now find themselves 10 points adrift from Napoli who are the current leaders, and they haven’t been able to maintain a domestic clean sheet since last season’s win over Spezia on March 2. That’s 18 Serie A matches without a clean sheet.

Finally, this is the first time in 60 years that Juventus fail to win a match in their first four league matches of the season.

Allegri’s angry words and a spat between two players – what happened after Juventus-Milan?