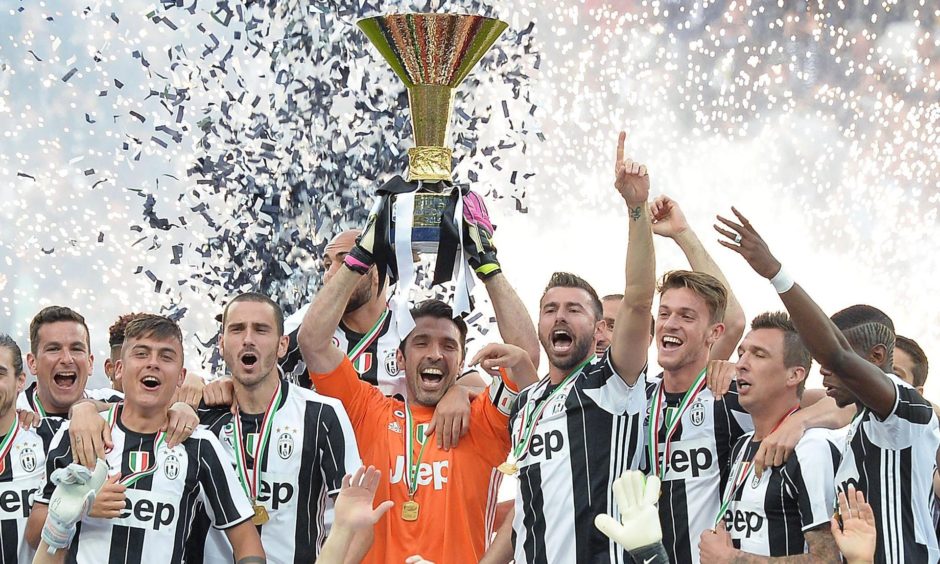 Rather than tearing my hair out at Juventus’ recent less-than-stellar run of results, I decided to seek a little perspective. Fall is that time of year  in which the Bianconeri often indulge in mediocre performances and/or lackluster results.  This made me think of the pundits, detractors and, yes, fans, who seem convinced that this is the year in which Juventus’ stranglehold on the Scudetto can finally come to an end. Then, I thought about what I believe to be the most memorable of all these past six seasons.

Now, I believe that both the 2011-2012 and 2016-2017 seasons are worthy candidates for this mention. However, my pick for our most memorable season since the first ball was kicked in a Serie A match at Juventus Stadium is the one that brought our 5th consecutive league title and 34th overall: 2015-2016.

We’ll Be Singing, When We’re Winning

The 2014-15 season had brought us our first Coppa Italia in 20 years and our 4th straight Scudetto. And yet, after a heartbreaking loss to Barcelona in the 2015 Champions League Final, the departures of Andrea Pirlo, Arturo Vidal and Carlos Tévez rocked the squad. Losing any single one of those fundamental players would be a shock for any team. But all three? At once? Doomsayers began to salivate at the notion of Juventus being knocked down from their perch.

The management, as always, stepped up and brought in important reinforcements. Notably, Mario Mandzukic, Juan Cuadrado, Alex Sandro, Sami Khedira and, most important of all, Paulo Dybala, fresh off a season of heroics at Palermo. Still, even with the undeniable quality of the additions, there was a sense that Juventus had become vulnerable.

“We will be as dominant as we have been for the past 4 years, if not more!” another one added.

(OK, actually I was the one who said both things. In my defense, similar thoughts went through the minds of most Juventus fans).

A triumph over Lazio in the Supercoppa the weekend before the season opener suggested that, heavy turnover aside, the new season would be business as usual for the Bianconeri. Moreover, the fact that our two new marquee strikers scored the goals seemed about as good an omen as we could wish for.

And then, the season started…

I Get Knocked Down…

I struggle (and fail) to find a metaphor devoid of profanity with which to describe the season-opening defeat at home against Udinese. Catching Juventus flat-footed with a late strike, Cyril Théréau put the Italian champions to the sword. Even worse, the team looked devoid of ideas as to how to break down the stubborn Udinese backline.

The sting of enduring our first Serie A home defeat in over two and a half years worsened seven days later when we visited Roma at the Stadio Olimpico. In a truly atrocious outing, Juventus somehow managed to go two men and two goals down before the clock ran out. However, in retrospect, the game also had two noteworthy aspects. The first was Paulo Dybala firing home his first Serie A goal in a Juventus shirt. The second was perhaps the more meaningful of the two. In spite of the shambolic display, Juventus still came within a whisker of sharing the points in Rome. The only reason it failed to do so was a near-miraculous save from future Bianconero Wojciech Szczęsny in stoppage time. 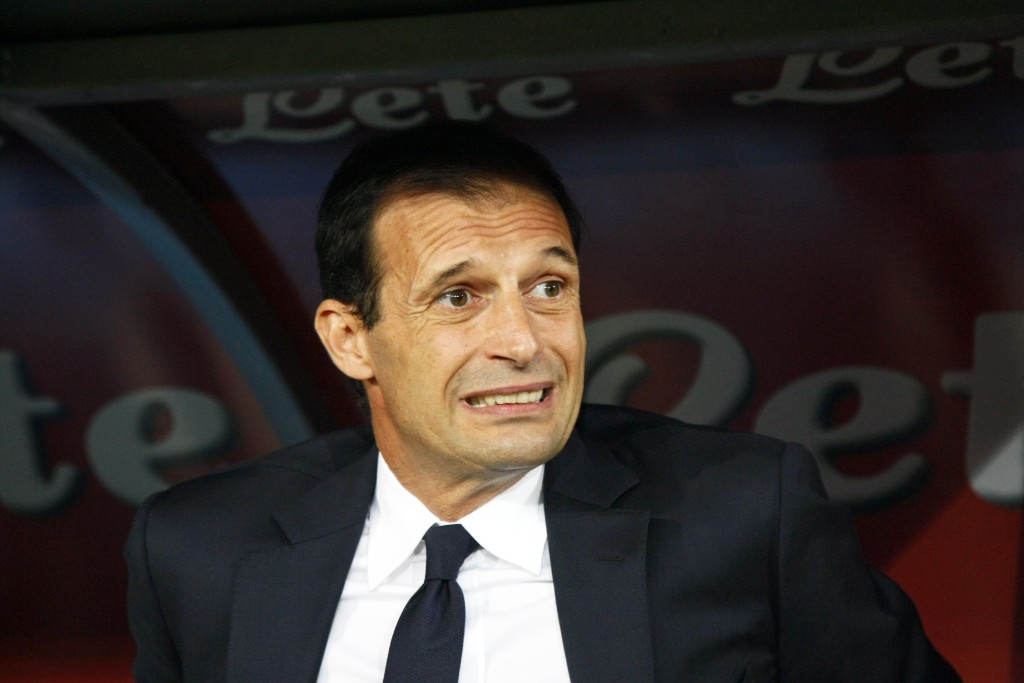 After the international break, the team had a mixed bag of results in the following three matches. Then, the Bianconeri endured another defeat away at Napoli, who were smacking their lips at Juventus’ dreadful form, sensing that the Scudetto might finally be theirs for the taking after a 26-year wait. They subsequently secured home wins against Bologna and Atalanta on either side of a 0-0 draw at Inter.

Then came the nadir.

By all accounts, Juventus were expected to take care of business against Sassuolo at Mapei Stadium. And yet, within 20 minutes, Nicola Sansone had put the hosts ahead with an absolute stunner of a free kick, a goal worthy of Pirlo himself. 20 minutes later, we again found ourselves a man down. Chiellini, in a moment of madness, plowed through Domenico Berardi. The referee rewarded the defender for his troubles with a second yellow card. Predictably, Juventus were unable to find its way back into the match. Thus, with ten games into the season, Juve had collected only 12 points. Then-league leaders Roma had an 11-point advantage over us. Used to sitting pretty atop the table after 10 rounds, we were instead lingering in 12th place.

Not even a Europa League playoff spot.

Not even the top half of the table.

The appalling situation clearly called out for leadership. Never one to make or accept excuses, Gianluigi Buffon stepped up. Asked about potential complaints about the referee, Buffon quickly shot down all such talk.

“Talking about the referee all the time is what losers do and we do not stoop to that level. We wear the Juventus shirt and must do it justice,” he was quoted as saying.

Would such a call to arms be enough? Could it? In all of Serie A’s history, no team had recovered from such a large early deficit in time to conquer the league. Considering that, by then, more than 25% of the season was already in the books, it seemed like the best the team could hope for by season’s end was a Champions League playoff berth…a tall order at that.

Therefore, the stakes could not be higher going into the Derby Della Molle at Juventus Stadium on Halloween.

…But I Get Up Again

The Bianconeri took the field against their crosstown rivals on October 31, 2015. To be sure, by that time, their woeful form made a fifth straight Scudetto seem little more than a pipe dream. Juventus players were mostly looking to redeem themselves and their sense of self-worth. After kickoff, events began to unfold pretty much in line with how the season was going: complete and utter crap.

Sami Khedira succumbed to injury in the 11th minute, making way for Juan Guillermo Cuadrado. Things started looking up when, 8 minutes later, Paul Pogba scored an absolute beauty of a goal from just outside the box. Opportunities arose on both ends of the pitch thereafter.  Nonetheless, Juventus hung on to go into the break still leading by the barest of margins. 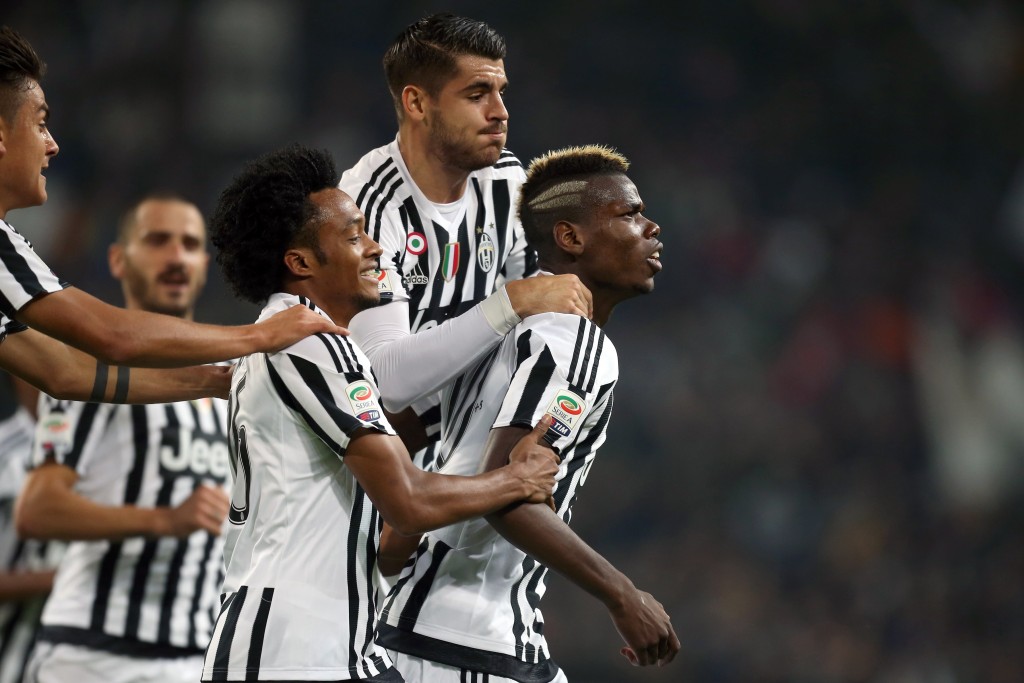 Then, play resumed and six minutes later the Granata were level.  Buffon was helpless against a high-powered rocket off the left foot of Cesare Bovo. The second half produced a few near-misses on both ends of the pitch, with both Torino goalkeeper Daniele Padelli and Buffon producing world-class saves (the latter summoning up the Spirit of 2006 in the process). Then, Cuadrado, he who fortuitously took the field after the injury to Khedira, summoned up another spirit, Pirlo’s Spirit of 2014.

Sliding, rather than flying, by the seat of his pants, Cuadrado scored deep into stoppage time in practically the last play of the game, sending the home fans (and Buffon) into raptures. Elation, relief, and not a little disbelief, were all at hand after such a dramatic derby win. In giving Juve the win, however, neither Cuadrado nor his teammates realized what they unleashed.

…You’re Never Gonna Keep Me Down

For the next 25 games, Juventus returned to the steamrolling form it had known since the 2011-12 season. Out of 75 possible points, it collected a jaw-dropping 73. The highlight was the home game against league leaders Napoli on February 13, 2016. A late Simone Zaza strike proved to be an early Valentine’s gift to all Juve lovers.  The goal sealed a 1-0 win that would propel Juventus to the top of the table, a position it would not relinquish. 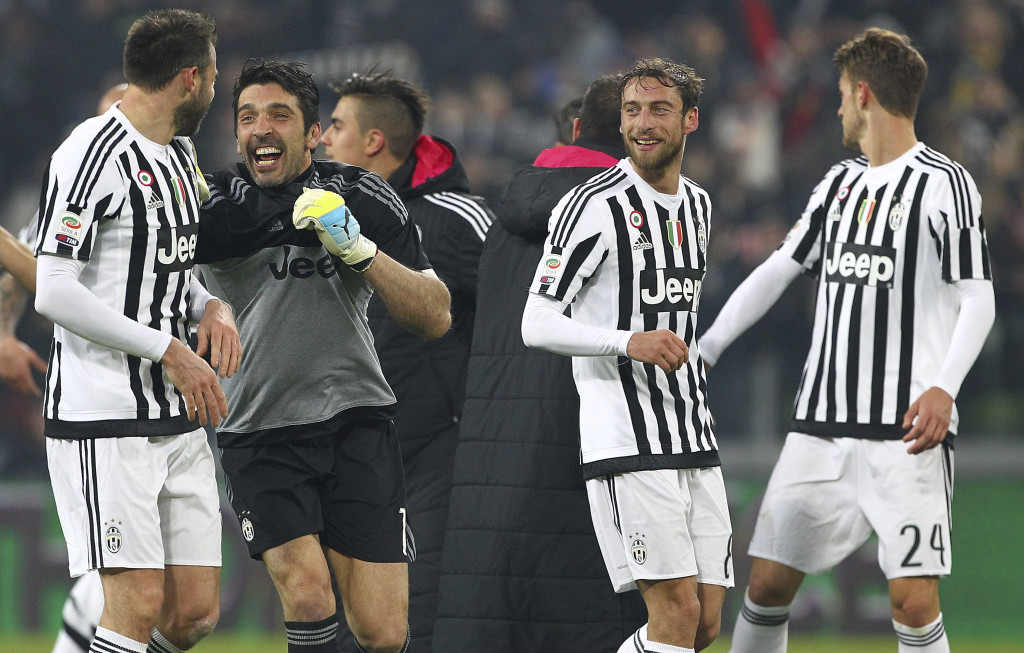 TURIN, ITALY – FEBRUARY 13: (L-R) Andrea Barzagli, Gianluigi Buffon and Claudio Marchisio of Juventus FC celebrate a victory at the end of the Serie A match between and Juventus FC and SSC Napoli at Juventus Arena on February 13, 2016 in Turin, Italy. (Photo by Marco Luzzani/Getty Images)

The 2016 Scudetto victory proved the importance of perseverance and, above all, leadership. The season turned around in no small part came thanks to the guidance of Allegri, with his professorial patience and tactical savvy.  And, of course, the leadership of Buffon, who was the first to assume responsibility for the early dismal results, as he simultaneously demanded more from himself and his teammates.

The importance of leadership was apparent in a more subtle sense as well. Only 6 years after the Calciopoli fiasco (with the ensuing dire consequences for the club), Juventus once again lifted the Scudetto, and has not relinquished it since. Its rivals, in the meantime, mostly floundered despite facing no such consequences. And yet, just as Calciopoli heralded the start of Serie A’s descent into the shadows, it is now evident that Juventus’ 2012 return to glory was the first salvo in Serie A’s resurgence. 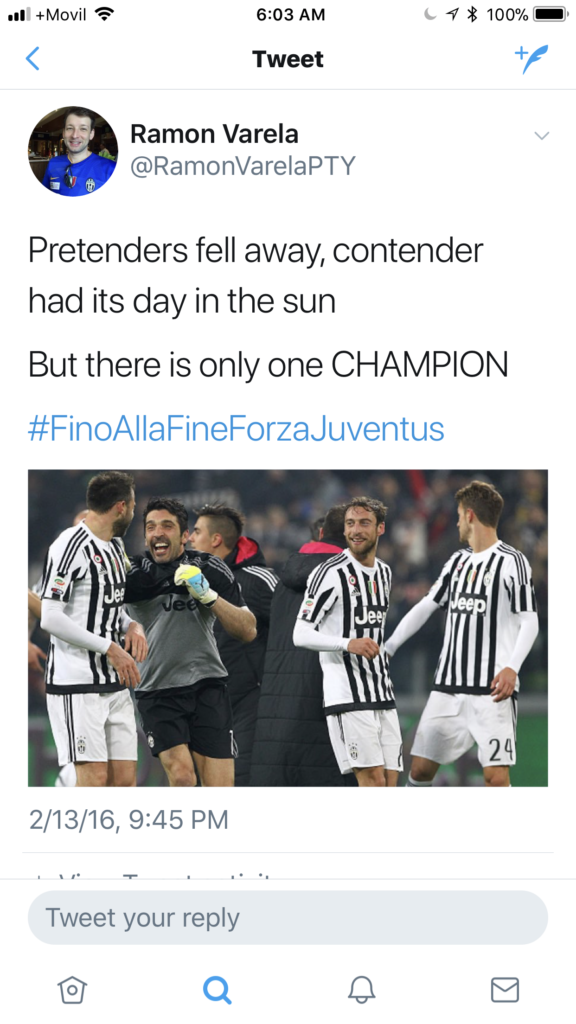 Our rivals were happy to see the Old Lady’s early stumbles in the ’15-’16 season.  But Juve’s unprecedented comeback was one of the main motivators for them to finally step up their game. To wit: the points gap between first and second place last season (4) was the lowest in five years.  Also, the current season seems to be shaping up to be a more competitive race. As Juventus lead the way, the other Serie A teams had to come to terms with reality.  They realized they could no longer rely on excuses or finger-pointing to cover up their own shortcomings.

Juventus mounted one of the all-time greatest comebacks in club football history.  In doing so, it  displayed its trademark Grinta (grit) and lived up to its club mantra, Fino Alla Fine. It also overcame a deficit that no other club in Serie A history had overcome before.  From 0 points and 17th place after two games, it went all the way to the championship, with a 9-point advantage to boot. After being the laughing stock for the better part of two months at the start of the campaign, Juventus deployed all its quality and tenacity to earn the last laugh. In doing so, it achieved The Sweetest Victory.