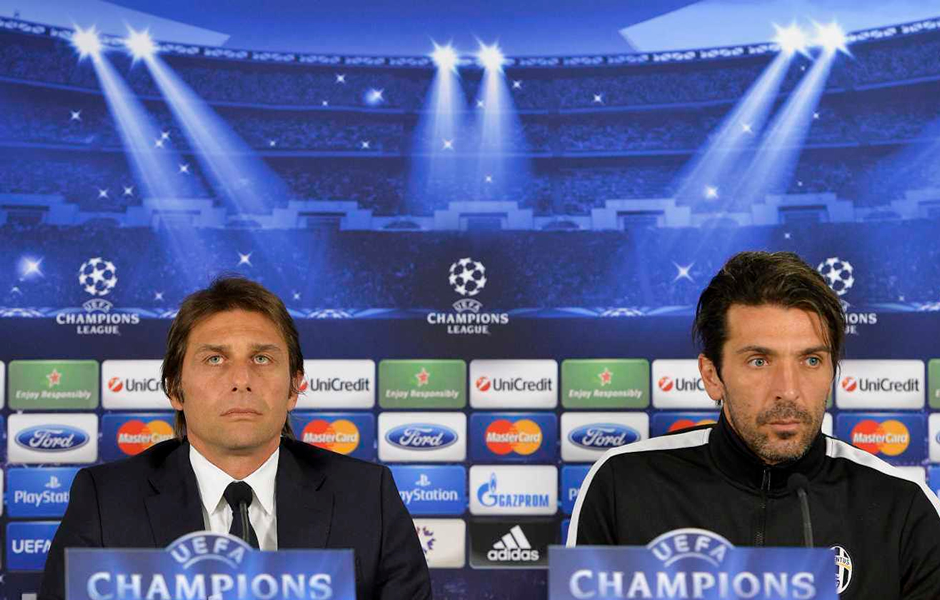 To Conte: Assuming that Juventus have little to prove in Serie A, is qualifying especially a matter of pride?

Tomorrow there is the return leg of an EL round of 16. What I always say is that Juventus’ habitat must be the Champions League and that we must have a path in the Champions League. That’s why this year there is a big regret for stopping at the group stage, ten minutes before the end of the game, and thus for not having our path. We slipped into Europa League, we’ll try to honor the challenge with our best effort to progress: with pride, passion, enthusiasm and everything we have.

To Buffon: Is this label of an unbeatable team in Italy starting to bother you, while outside of it things are different?

Labels are given, but they can quickly be torn off. That’s why I believe that when you have the opportunity to prove yourselves, there is always the hope to make everybody eat their words and change their mind.

To Conte: Will Tevez play? Today Totti said that Juve is the strongest team, but when things weren’t going very well, you always got some little help [by the referees]. Do you want to comment this?

The first question, the right one, what was it?

To Buffon: Speaking of cancelled labels, finally there is no more talk about the unsaved penalties. How did you live this rehabilitation?

As far as I’m concerned, I’ve nothing to say, only there was a lack of will to go searching for the goalkeeping stats, they were only speaking hearsay. When they found this will, they discovered that they were saying something incorrect and very distant from the truth. It’s a good thing that somebody did this effort.

To Conte: a remark on these injuries that are starting to increase. Is it a coincidence?

It is surely a particular moment, maybe the most critical on the injury standpoint under my tenure. Injuries can happen, they are part of a season, maybe I should have rotated the squad more, while maybe I always fielded the same players.

To Conte: To contextualize tomorrow’s game, is it enough to consider the last two matches or you have to include in the records also the first match in Florence?

We have to summarize all three matches and to make the needed and careful evaluations. We did that and surely they did that too. We need to consider all three games.

Who has more to lose?

Conte: I start from the premises that all matches in Italy are full of tensions and pressures for both teams. Sincerely, I don’t feel all this pressure on Juventus because Juventus’ path shouldn’t have been in Europa League, but in Champions League. Our big regret is the elimination in Turkey, by the hands of Galatasaray. That said, we started this path and it’s right to try to do our best. We are used to the pressures and they will be the same that accompany us in every game, because Juventus always have to win regardless, so nothing change.

Buffon: In my opinion, when there are these games there is not somebody who has more and somebody who has less to lose. Who will exit will have had something to lose because, in the end, in a big or in a small way, everybody has to look at his own backyard and hope to have this satisfaction to try to move on in this competition.

Seeing the last five games you played against Fiorentina, it seems that no other team has made you labor more, also tactically, beside last year’s game in Turin where you smashed them. What is Fiorentina’s quality that make your game difficult, compared to other teams?

Buffon: I don’t know if it’s randomness or not, surely tomorrow there will be another game and another test to see if it’s right or not. Anyway, surely we can’t deny the fact that Fiorentina is composed by excellent, world class elements, so it’s normal that they can make you struggle. And they have a very good coach.

Thinking about the first leg, is Gomez the player you have to fear the most?

Conte: I don’t think we must fear only one player, but the whole roster, because it’s composed by world class, high quality players. One name I’d like to mention is Borja Valero, that is certainly an extraordinary player in the interpretation of his role. But we could name many more: Cuadrado, Pizarro, Gomez, Rodriguez, Savic that are surely doing well and are excellent players. There is not only one player that worries me. We have great respect for the whole Fiorentina squad.

Buffon: I think that the coach is right, as far as I’m concerned, since I’m a defender, I say let’s keep an eye on their strikers, on Matri and Gomez, and on who attacks a lot.

Preview and Scouting: Fiorentina vs Juventus

Fiorentina 0 – 1 Juventus: Bianconeri Qualify To The Next Round Of Europa League