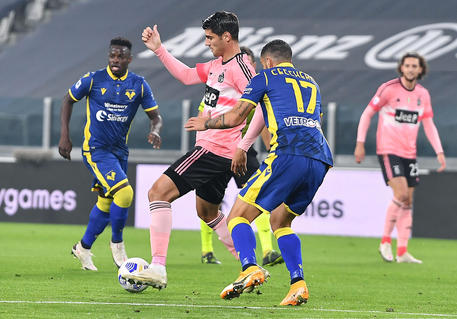 Juventus are preparing to take on Hellas Verona at the Bentegodi stadium.

When the two sides met earlier in the season, the Gialloblu were surprisingly able to hold the Italian champions to a 1-1 draw at the Allianz stadium.

Andrea Favilli opened the scoring for the visitors, and Dejan Kulusevski salvaged a point for the Old Lady in Ronaldo’s absence.

Therefore, Andrea Pirlo knows that he has a tough task ahead of him against a defensively solid side.

So let’s a look at three Verona players that Juventus should look out for.

The goalkeeper was undoubtedly the man of the match in the first encounter, repeatedly denying the likes of Alvaro Morata and Paulo Dybala.

The Italian will have to go against Ronaldo this time, and he’ll be eager to prove himself on the big occasion against the biggest star in the league.

The Inter-owned wingback is becoming a force to be reckoned with on the left.

The young Italian is reportedly being considered by Antonio Conte who will be looking to bolster his aging left side for next season.

So what better way for Dimarco to make a name for himself than putting on an impressive display against his parent team’s biggest rival.

Mattia Zaccagni has attracted the interest of several top Italian sides for his performances this season, but Antonín Barak is no less important.

The midfielder combines his high work rate with his technical abilities, and under Ivan Juric, he has become an attacking midfielder that any manager would like to have among his ranks.