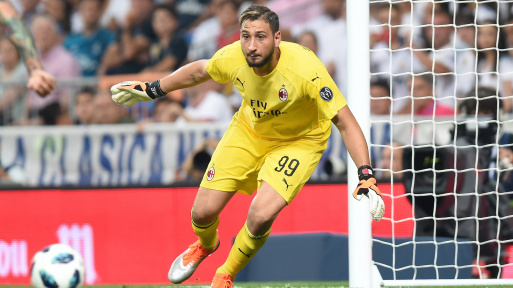 Chelsea and Manchester United are believed to be interested in signing Gianluigi Donnarumma from AC Milan this summer, with Juventus also believed to be keen.

The Rossoneri shotstopper is unlikely to be short of offers, having emerged as one of the best goalkeepers in Europe from an early age, making his full international debut for Italy before his 18th birthday. The Transfer Window Podcast named both United and Chelsea as interested parties, and I struggle to believe he wouldn’t have a host of options should he refuse to extend his stay in Milan.

The Premier League could well prove to be an exciting option for the goalkeeper. He appears to love AC Milan, but the club may no longer meet his ambition, having failed to win a major trophy in a decade, with the young goalkeeper having just a Supercoppa Italiana winners medal in his arsenal.

His love for the club may well sway him away from a move to Juventus, although it remains to be seen whether he has intentions to move abroad.

The chance to play and train alongside Juve and Italy legend Gigi Buffon could well be an attractive prospect however, as I struggle to believe that any young goalkeeper would not have looked up to our Gigi growing up.

The Blues have spent a fair amount on both Edouard Mendy and Kepa Arrizabalaga in recent windows, but the more expensive has found himself playing second-fiddle this term.

Man United also have question marks over their number one, with Dean Henderson challenging David De Gea for the main role, with the Spaniard believed to be struggling for form.

The chance to bring in Donnarumma could well prove too good to turn down for other clubs also, but the finances of both Premier League clubs will be tough to compete with if the AC goalkeeper was open to moving abroad.

Do we believe Donnarumma’s intention would be to stay in Italy? Could Buffon be used to persuade his young counterpart?