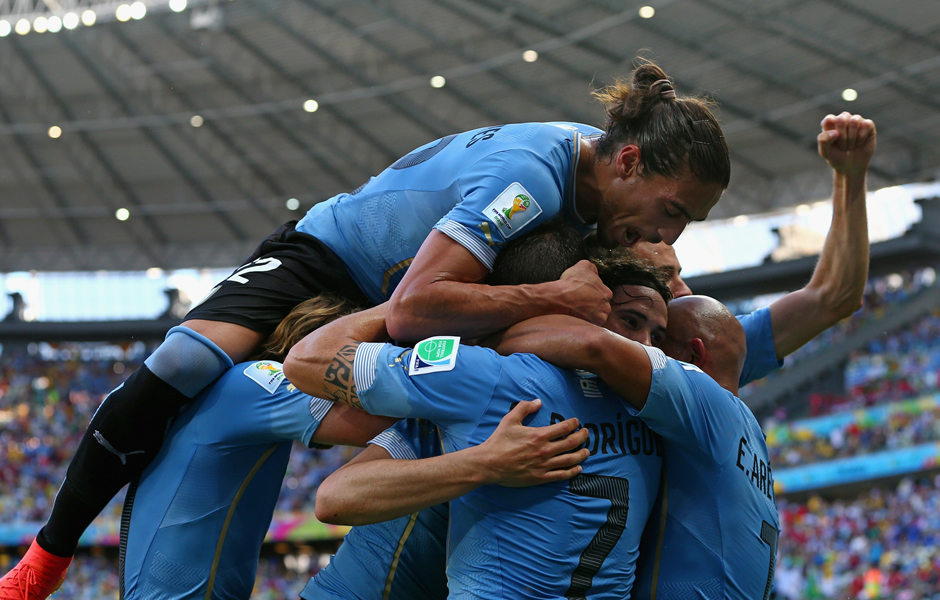 Match day three of the 2014 World Cup saw Group D begin with Uruguay taking on Costa Rica in Fortaleza. Uruguay went into the game as heavy favourites but knew that this was a crucial game as next up are England and Italy and La Celeste wanted to get off to a winning start.

Juve’s Martin Caceres started at left back for the South Americans, which some Bianconeri fans found odd but El Pelado has for the most part played there under Oscar Tabarez and usually excels in the position.

Uruguay’s Luis Suarez hasn’t quite recovered from his knee surgery and so took a place on the bench with former Napoli striker Edinson Cavani and ex-Inter flop Diego Forlan spearheading the attack.

Costa Rica started the game with a 4-5-1 formation, the primary objective was not to leave space for Cavani to run into. This Uruguay side is not the side of the last World Cup or the team that triumphed in the Copa America a year later, a lot of the key players are aging and it showed.

They were very workman like throughout the game, with Caceres being comfortable at left back.

Uruguay were awarded a penalty in the 22nd minute when Diego Lugano was pulled down in the penalty box, Cavani stepped up and slotted it home.

One would have expected the flood gates to open and for Uruguay to add further goals, but as they battled with their limited team, the Central American side grew into the game and equalised through a well taken Joel Campbell strike (who was once linked with Juve).

Three minutes later they unbelievably added a second from a set piece, Oscar Duarte directing a beautifully placed header past former Lazio keeper Fernando Muslera. The Costa Ricans were now playing with the wind in their sails and Uruguay were resorting to their old volatile selves, picking up numerous bookings.

Costa Rica then added a third goal six minutes from time when Campbell, who was brilliant throughout the game, slipped a gorgeous through ball into the path of substitute Marcos Urena, who placed it first time past Muslera.

It was a thoroughly convincing display from the minnows, and Uruguay were reduced to ten men when Maxi Pereira got sent off, the first player to get dismissed in the tournament.

In terms of shocks the result has to be up amongst Holland’s 5-1 trashing of Spain the day before, merely because no one expected Costa Rica to be much of a threat. They have thrown a spanner in the works and made life in Group D a little bit more interesting. Italy and England watch out.

As for Martin’s performance, he played decently without ever really shining, he played a lovely one-two backheel with Cristian Rodriguez in the first half, it has to be said he looks more confident with the ball in a sky blue jersey than in black and white.

He threw himself into tackles like only El Pelado can, he later picked up a yellow card for a rash challenge, what he can’t however is mask the weaknesses in the Uruguay side. Which were exposed for all to see.