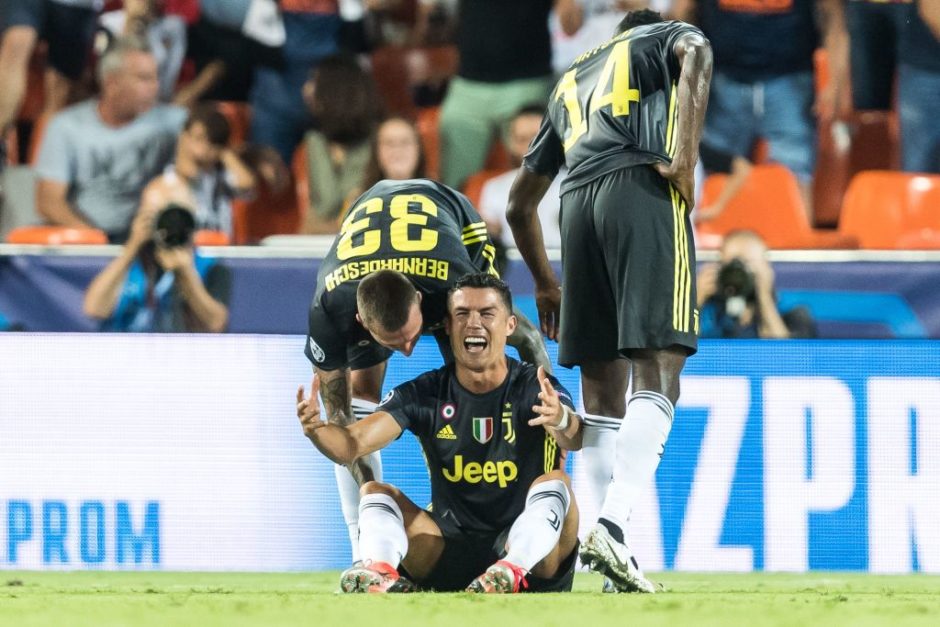 Juventus were reduced to 10 men but overcame the odds to beat Valencia 2-0 in their Champions League opener.

It’s difficult to know where to begin and while the victory came against the odds, I’m half grateful that we started our Champions League campaign in such dramatic fashion. The team won-out: It was a victory centered around the collective experience of the players which allowed them to work together to ensure the result. While certain members of the team were exceptional, Federico Bernardeschi and Joao Cancelo in particular, it was a victory that only possible because of the cohesiveness of the XI men on the pitch, and they performed exceptionally well.

There’s plenty to learn from the game and in a way, its preferable to have gone through this early on in the season as opposed to later in the campaign. Nothing should surprise us in Europe. The result aside, the refereeing was absolutely woeful and while Cristiano’s transgression was a yellow at best, there was a booking for a non-existent tackle by Alex Sandro and a dubious call on Daniele Rugani for the Valencia penalty. I’d like to think the team not only weathered the storm,  buoyed by the final result, but that they’ve also understood that these games should be taken in isolation – everything rests on playing a perfect 90 minutes, concentrated and focused with no margin for error. There’s time to make up points in the league and leads can be reduced; the Champions League is unforgiving, ruthless and tolerates no mistakes.

For his part, Ronaldo looked devastated when sent off and his emotional outpouring only endeared me all the more to him. He wanted to have an impact, he wanted the goals and he wanted us to win. Of course, he wanted to be at the heart of the victory as well, but winning is all that matters to him, and there’s no doubt that the injustice of the moment spurred on his teammates who all rallied around him.

At 2-0 up, the movement of the team, the determined nature of the back line, the dogged work in midfield and the tireless runs in the attacks, gave a kind of confidence. It didn’t look as though Valencia had any chance of getting back into the game and the confidence the players exuded, despite being under pressure, helped sap the life out Valencia’s attacking play. With the heroic’s in Madrid aside, it’s been a while since i’ve seen Juventus play in such a manner.

A few have asked if Ronaldo will miss the games against Manchester United, so here’s clarification:

– If UEFA deem his conduct to be aggressive, he could be given another one or two game ban, which means he could miss the United game(s)

– The UEFA Control, Ethics and Disciplinary Body (UCED) is expected to meet on Thursday or Friday and we can expect an outcome then

– If UEFA decide to ban Ronaldo for longer than one game, Juventus will have a chance to appeal the decision

– They can appeal within three  days of getting the decision

The initial rumblings in the usual papers indicate that there will be no further punishment but for the moment, we can only wait and see.

The sheer bloody-minded grinta on display reminded me of some of the backs-to-the-wall type performances we gave under Conte where we may not have had the technical prowess and attacking flair, but our stubbornness and togetherness was enough to get us over the line. It was far from the perfect start we’d all have hoped to have in this cursed competition, and yet it showed something of this Juve side that we’ve not seen in a while: Character. The team fought for one another, there was real leadership on display and most importantly, their heads never dropped and they never allowed the game to get away from them. It’s a real testament to the hunger and desire of the players.

I think we’ve also found a formation we can stick with for the foreseeable future: 4-3-3 works well for us and incorporates almost all the key players in the team. While it still needs some fine-tuning and our finishing left a lot to be desired, there are plenty of positives to the way we played, especially at the back.

If there’s any areas to be improved, I think we still need more from our midfield than just running and tackling- Some creativity and sustained pressure would be an advantage but it seems a little harsh to be overly critical when they mustered a deserved win in such difficult circumstances.

Up front, we wasted at least three golden opportunities to take the lead, long before Ronnie had been dismissed. Khedira’s chance in particular, should have been buried into the back of the net, there’s no excuse for missing a chance like that. We need to be more ruthless and perhaps had Cristiano remained on the pitch, he’d have been the clinical finisher we’ve lacked at times.

Leonardo Spinazzola is working his way back to match fitness but Andrea Barzagli has a thigh injury that could keep him out for at least two more games while Mattia De Sciglio may be out for longer following a thigh injury picked up in training. Sami Khedira injured his thigh in the opening 20 minutes of the game and while there’s no updates yet, he’s expected to undergo tests within the next 24 hours. Douglas Costa suffered a contusion to the foot and a thigh injury, but he’s suspended for four league games and wouldn’t have featured until the end of the month anyway when Juve host Young Boys. 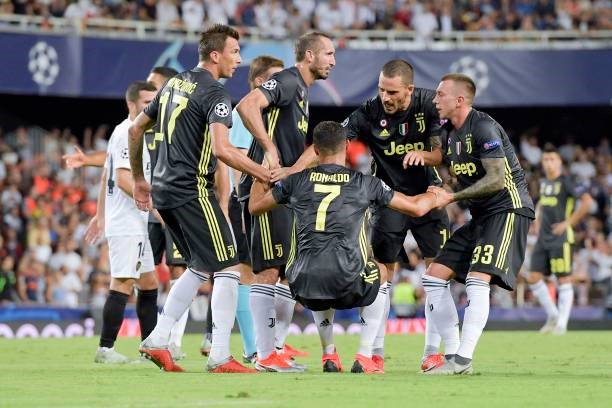 Man of the Match: Joao Cancelo

Valencia have had a torrid time of late and there was a feeling that their season was yet to begin after three draws and a loss in La Liga. They defied expectation last season, finishing fourth on the back of some really strong performances, aided by a rejuvenated Geoffrey Kondogbia and Norbeto Neto and a bolstered attack where Rodrigo and Santi Mina scored consistently. The absence of Kondogbia in this game caused them to struggle in the centre and Parejo in particular was woeful, giving away a penalty and later failing to convert his own spot kick. Murillo and Gabriel were haphazard at the back and all too easily exposed when Juve still had 11-men on the pitch and some better finishing from the Bianconeri could have put the game to bed in the opening 45 minutes.

A visit to Lazio to face Frosinone seems a straight forward encounter, but its games like these that can be the most frustrating. The hosts are in 19th place having picked up a solitary draw so far this campaign, despite having failed to score a single goal in four matches. There’s some experience to the team as well as some familiar faces in the back line which includes Juve old-boys Cristian Molinaro, Lorenzo Ariaudo and Edoardo Goldaniga. Their midfield is stacked with work-horse types like Lorenzo Crisetig and Emil Hallfreðsson while the attack lacks any consistent or reliable goalscorers. It’ll likely be a tough and grueling encounter, 11 men behind the ball as we try and use the flanks to create space and break down a stubborn side who already look destined for relegation.

Cristiano looked to be working his way into the game and was seemingly improving as Juve started to dominate a little. His red card was unfortunate, but he would have had to go some way to better Joao Cancelo who stole the show. The right-back was composed at the back where his defensive contribution has massively improved. His positioning during the Valencia attacks was perfect and he provided a constant outlet down the right channel. He won the penalty that gave Juventus the lead, then hit the crossbar before supplying the run and pass which lead to the corner from which Juve were awarded the second penalty. He’s looking more and more like a worthy long-term successor to Stephan Lichtsteiner and the kind of player who could one day become the best in his position.

It’s very hard to fault the Mister following the performance. I think his starting XI and the setup was the best available and it made sense to keep Dybala and Costa on the bench as both could have an impact, should we have found ourselves still looking for a result late in the game. It seems Allegri has stuck with 4-3-3 for now and there’s no denying it gets the best from the team as a two man midfield has been all too easily overrun, especially in Europe, where a combination of Khedira/Matuidi and Pjanic hasn’t made the grade. The Ronaldo red card could have forced Allegri’s hand but he decided to stick it out and save the substitutions for later in the match, exactly when we really needed fresh legs to hold onto the result.  Overall, a good night and vindication for the boss who played his hand perfectly. 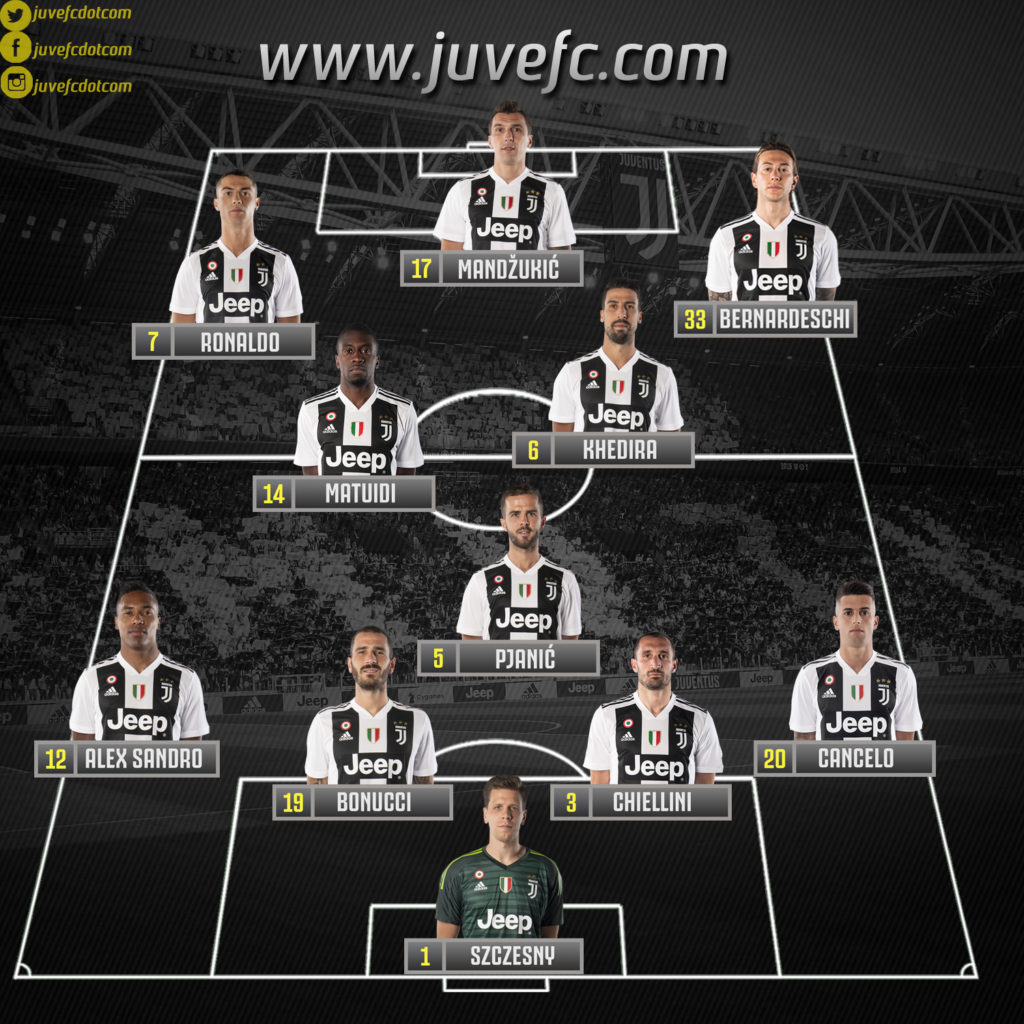 With an almost fully-fit squad at his disposal, there were no real surprises from the Mister in terms of selection. I think he’s tried and tested a few variants and decided to stick with 4-3-3 as it seemingly gets the best out of the players and utilizes the speed of Costa and Ronaldo down the flanks as well as the emerging talent of Bernardeschi. There was no place for Dybala but that was almost a given considering he was a slight risk for the game in the first place and the only position we could have used him effectively in a 4-3-3 would have been at the tip of the attack. In the long-term, it poses a question as to where La Joya is going to fit in, as it makes little sense to sacrifice the beginnings of a reliable and stable tactic, simply to play all the ‘big’ players. Perhaps the only worthwhile switch will be to see Emre Can play a more prominent role and perhaps for Paulo to rotate with Mandzukic, but otherwise, this looks like the way forward. 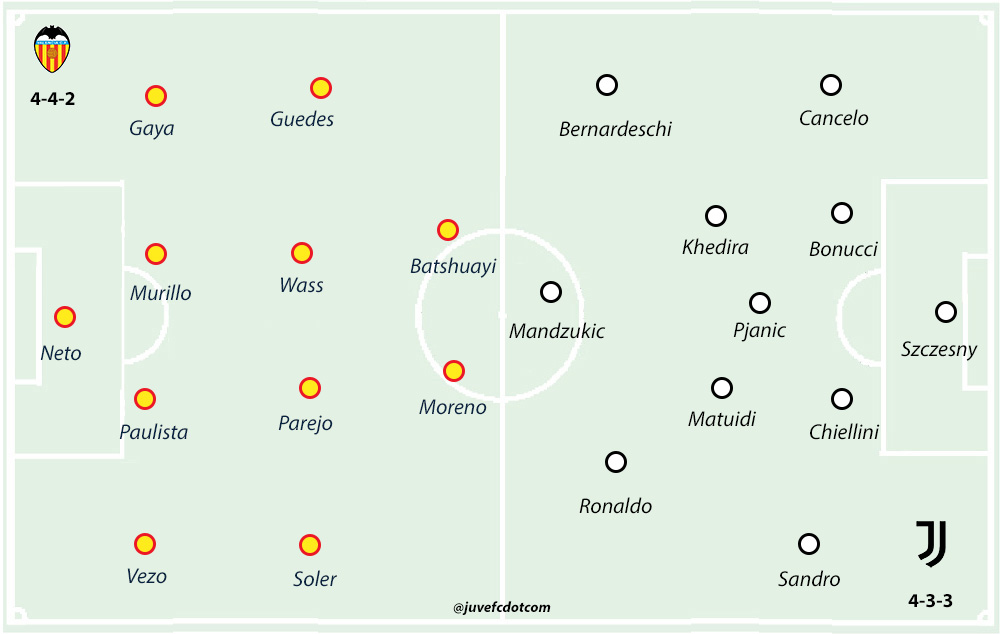