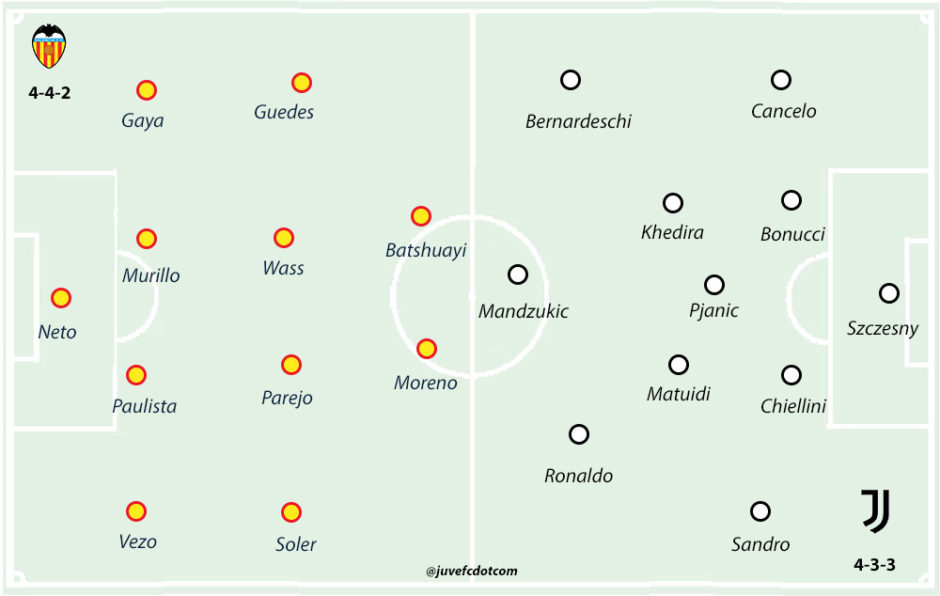 Juventus were reduced to 10 men but still managed to start their Champions League campaign with a win thanks to a brace from Miralem Pjanic.

Wojciech Szczęsny: Made a series of easy takes in the first half before being tested a little more thoroughly by the Valencia attack. Six out of six saves, including denying Parejo from the spot. A very bold, confident and assured display.  7.0/10

Leonardo Bonucci: Excellent play out from the back, completing 97% of his passes. Vital interceptions and clearances, perfect positioning throughout – A strong performance. 7.0/10

Giorgio Chiellini: A captain’s display, leading by example and spurring the team on. Ten clearances from the back, two vital interceptions and an evening full of good old-fashioned grinta. Marshaled Moreno with relative ease, reducing the Valencia attack to a series of half-chances. 7.0/10

Alex Sandro: Put in some good crosses on the left and was a constant outlet down the channel in the first half, regularly linking up with Ronaldo. Found himself a little more pegged back in the second half, which was to be expected. 6.5/10

Joao Cancelo: A little subdued early on, playing a tighter role on the right but he only improved as the game progressed, timing his tackles well, making three vital interceptions and constantly helping to relieve the pressure on the back-line. Won Juve the penalty that put the Bianconeri in the lead before making a spectacular tackle, sprinting down the right and earning a corner that led to Juve’s second goal. Exceptional. 7.5/10

Sami Khedira: Started slowly and wasted a huge opportunity to give Juve the lead 17 mins into the match. Injured on the 20 minute mark and subbed off. N/A

Blaise Matuidi: A good runner in the midfield although he was a little over-enthusiastic at times. Should have put away the chance that Bernardeschi spurned, but as usual, his work-rate couldn’t be faulted, nor could his defensive contribution. 6.5/10

Mario Mandzukic: Fired a good chance over the bar early on in the first half but proved a good focal point for the Juve attack, holding up the ball and bringing his teammates into play.  6.5/10

Cristiano Ronaldo: Drifted left and right before testing Neto from distance. Put in some fantastic crosses and made some brilliant runs into the Valencia half before being sent off in truly bizarre fashion. Granted, he placed his hand on the opponents head, but the referee’s reaction was very harsh. Expected to miss the trip to Old Trafford – thoroughly undeserved.  6.0/10

Federico Bernardeschi: Started really brightly, drifting to the right and putting in some great crosses before teeing up Khedira for what should have been a tap-in. Had a chance of his own that he should have converted but he was Juve’s brightest player in the opening half and that continued into the second where he had the beating of Guedes and Gaya nearly every time. His movement on and off the ball was sharp, he made some great runs down the flank and was our best attacking threat. Big game Berna. 7.5/10

Emre Can: Came on for Khedira early on and helped steady things in the centre. Obviously has plenty more to offer but spent much of the night playing a more defensive role. 6.0/10

Douglas Costa: Played the final 20 mins and managed to carve out a good chance for himself when Juve were under pressure. 6.0/10

Daniele Rugani: Entered late on and his sole contribution was to give away a slightly harsh penalty. N/A