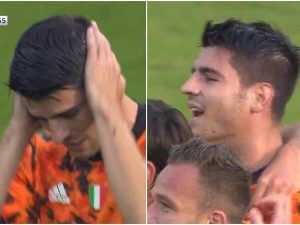 Video: Alvaro Morata has offside overturned by VAR for 1-0 lead

Alvaro Morata famously had a hat-trick of goals disallowed in midweek, but this time has opened the scoring for Juventus despite the offside flag.

Our team has started brightly today, and has been very much on the front foot, and we have now taken the early lead.

After a VAR review, Morata finally picks up his goal 🔥 pic.twitter.com/raEugeLZPq

Will Morata bag a handful now he has broken his VAR curse?

Video – Osvaldo’s late winner is the goal of the day

Video: Spezia level but Juventus will be cursing their luck