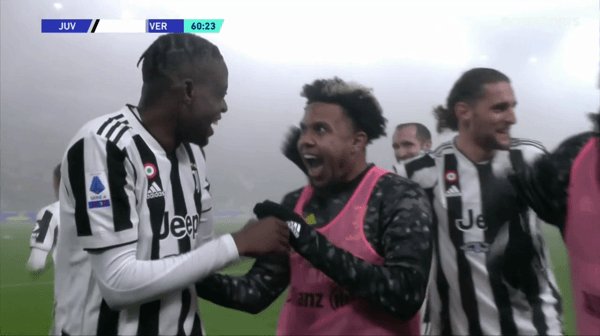 Weston McKennie has been trending on social media after his reaction to new team-mate Denis Zakaria’s debut goal for Juventus last night.

The Old Lady came away as 2-0 winners against Verona last night, with goals from new signings Dusan Vlahovic and Denis Zakaria.

McKennie was caught showing extreme passion in celebrating with his new team-mate, enough to attract the attention of many onlookers who pointed out his reaction.

Denis Zakaria bags on the break for Juventus and Weston McKennie loves it! 🤝 pic.twitter.com/CQvyVUWVF3

Weston McKennie celebrating with Zakaria after his debut goal for Juventus 😂 pic.twitter.com/gIncDEaWLI

Considering that McKennie had been playing a regular first-team role of late, but finds himself on the bench following the arrival of Zakaria, you could be forgiven for believing that the American may not be the happiest with his signature, but the reaction to his debut goal shows quite the opposite.

McKennie’s reaction just proves that he puts the team first in my opinion, which is exactly the type of player that we want in this team, although we also want players to be showing their hunger when they do get their chance also.

Could Zakaria and McKennie fit into the same formation?