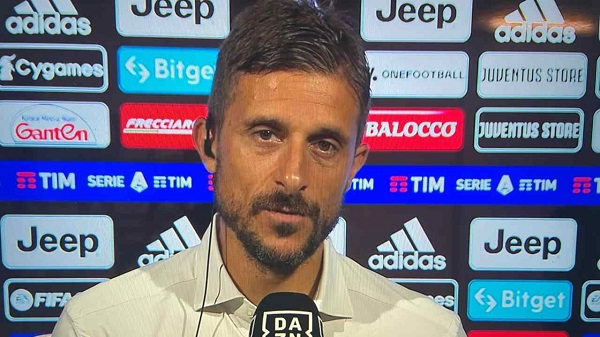 Sassuolo manager Alessio Dionisi has reacted to their defeat to Juventus in Serie A yesterday and claims they didn’t deserve to suffer the defeat.

The Bianconeri beat them 3-0 in their first game of the season at the Allianz Stadium after a tough summer.

They have lost Gianluca Scamacca, and Giacomo Raspadori could still leave them in this transfer window.

However, Dionisi still has to put out a team that must win matches for the club in this campaign.

His side tried its best in the game against the Bianconeri, but Juve was much better and they deservedly won.

However, the Black and Greens manager doesn’t believe they deserve to have lost the game. He said, as quoted by Tuttomercatoweb:

“I can’t be dissatisfied with the performance. We did not deserve this result. The third goal is our useless mistake, we didn’t need an exit like that, really. I prefer to make mistakes to play. We were a bit unlucky on the first one.

“The result is heavy. At the end of the first half, the result was not deserved and of this I am sure. We were not very incisive despite having shot more than Juve.”

Starting this season with a win was the perfect thing to do after our underwhelming preseason.

Sassuolo is a very technical side that always causes us problems, so this win will fill our players with a lot of confidence.