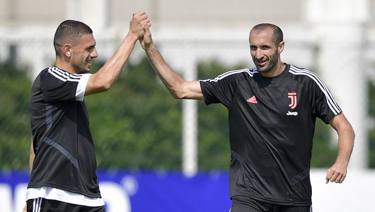 Almost two weeks ago, Juventus began their pre-season preparations with a depleted squad, with most of their stars given additional rest periods following their participation in the summer international tournaments.

Nonetheless, several others remain missing, but will be making their returns to Continassa soon enough, according to ilBianconero.

This Friday, Alvaro Morata and Rodrigo Bentancur are expected to arrive at the training ground, where they will be reunited with the returning coach. The Spaniard would be eager to put his Euro 2020 woes behind him, whilst the Uruguayan was only able to reach the quarter finals of Copa America with his national team.

However, the last flock is set to land next Monday (the 2nd of August), with seven players arriving to complete Allegri’s first team squad.

This list includes Juan Cuadrado who led Colombia towards the semi finals of Copa America, as well as Brazilian duo – Alex Sandro and Danilo – who lost the final of the competition against their eternal Argentinian rivals.

Besides the South Americans, Monday will witness the triumphant return of the four Italian players who led the Azzurri towards continental glory. These stars are of course club captain Giorgio Chiellini, Leonardo Bonucci, Federico Chiesa and Federico Bernardeschi.